The Last of the Buffalo, 1888 by Albert Bierstadt

The Last of the Buffalo is Albert Bierstadt's final, great, western painting. Measuring six by ten feet, the ambitious landscape combines a variety of elements he had sketched during multiple western excursions. Because of its composite nature, the view incorporates many topographical features representative of the Great Plains: the dead and injured buffalo in the foreground occupy a dry, golden meadow; their counterparts cross a wide river in the middle ground; and others graze as far as the eye can see as the landscape turns to prairies, hills, mesas, and snowcapped peaks. Likewise, the fertile landscape nurtures a profusion of plains wildlife, including elk, antelope, fox, rabbits, and even a prairie dog at lower left.

In the 1870s, when American entrepreneurs found a market in the fashion industry for buffalo hide, hunters responded eagerly. By the time Bierstadt completed this canvas the buffalo was on the brink of extinction, as were the Plains Indian peoples that relied on it for their survival. The seemingly infinite number of buffalo seen here suggest that The Last of the Buffalo is less an historical document than a statement of memory and myth. Placing two of the most potent symbols of the West, the buffalo and the Native American, at the center of his painting, Bierstadt offered a carefully composed fiction celebrating what white civilization had helped to destroy. 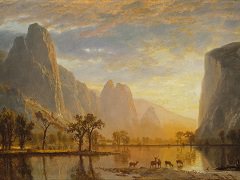 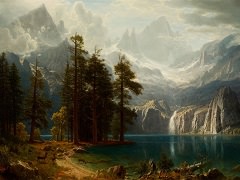 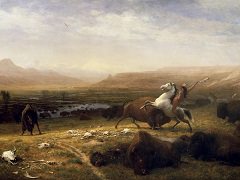 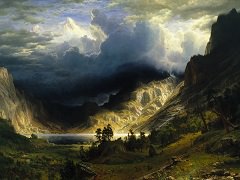